Situated in the heart of the Namib Naukluft Park, Sossusvlei, one of the most fascinating landscapes in Namibia, is a photographer’s dream. Gigantic orange dunes, dramatic shadows, undulating plains and rocky mountains create a magical kaleidoscope of colours and shapes. Aside from the attractions at Sossusvlei – Dune 45, Hiddenvlei, Big Daddy and Deadvlei – other attractions in the area include the Sesriem Canyon and Namib-Naukluft National Park, where the mountains of the Namib meet its plains. To the east, the Namib Rand Nature Reserve’s vast sandy plains are surrounded by towering granite mountains and rolling dunes. Here, in the oldest desert on the planet, desert adapted animals and plants come together to form one of the most visually stunning ecosystems in the world. This is truly the best way to experience the heart of the Namib desert is with a hot air balloon safari. Watching the spectacular sunrise over this magnificent landscape from a silent hot air balloon is the experience of a lifetime, never to be forgotten.

Etosha National Park is unique in Africa. The park’s main characteristic is a salt pan so large it can be seen from space. Yet there is abundant wildlife that congregates around the waterholes, giving you almost guaranteed game sightings. At the same time Etosha National Park is one of the most accessible game reserves in Namibia and Southern Africa. The general area is considered malaria free, while complimented with various luxurious lodges in the surrounding area. 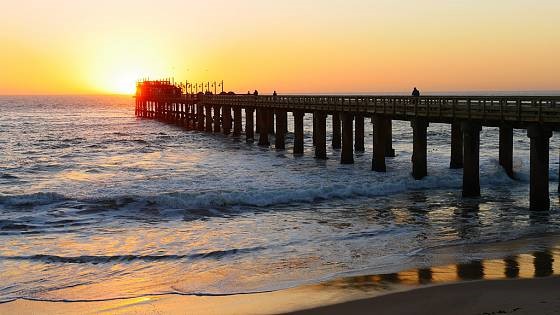 Founded in 1892 as the main harbour for German South West Africa, Swakopmund is often described as being more German than Germany. Now a seaside resort, Swakopmund is the capital of the Skeleton Coast tourism area and has plenty to keep visitors happy. The quirky mix of German and Namibian influences, colonial-era buildings and the cool sea breeze makes it very popular destination and is complimented with a variety of well recommended restaurants.